Admission to the opening ceremony was by ticket priced at 2s 6d - the average wage for a working man then was about £1 per week. Despite the cost the Hall was full which meant an audience of about 300. The Vicar addressed the assembled throng with a potted history of the Hall's evolution and construction. Four plots of land had been offered for the development, one of which was in Haw Lane, but the final choice was a plot which belonged to Colonel Henry Salmon, largely because of its central location - between the two villages.

The necessary funds were almost wholly provided by public subscription and the profits from a number of special events. Mr Rylands of The Down House at Old Down provided the design and supervised the Hall's construction. The building work was carried out by Mr Pitcher and his son (the great, great grandfather of Gavin Pritcher). The team of builders won high praise for the quality of their work and for completing the project a month early.

After the Duchess had been thanked for opening the Hall the proceedings closed with a recital by the Bristol Cathedral Quartet. In the evening a Dance was held which was 'largely attended'.

Accounts rendered at November 1st 1901 indicated that the Hall with its outbuildings cost £549 to build, fixtures and fittings cost a further £81 - including 12 long seats, 240 chairs, paraffin suspended lighting and bucket toilets.

The seating was reckoned to accommodate 320 people. The figure of 320 sounds high but it must be remembered that the only venues for entertainment and bazaars, etc, before the building of the Parish Hall were the National School Hall and the Friends Meeting House.

The Hall soon became the venue for village flower shows, lectures, concerts, dances and evening classes on first aid. The long running annual Sale of Work organised by Miss Parry in aid of Bristol Children's hospital moved to the Hall after a 17 year run at the Friends Meeting House.

The Small Room - sometimes referred to as the Committee Room - was opened as Reading and Recreation Room for men and youths over the age of 14. Smoking was allowed. 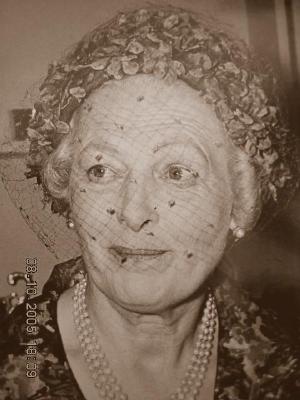 "At last we have a Parish Hall, the want of which has been felt for many years." With these words the Vicar of Olveston the Rev J E Vernon began his description, in the Parish Magazine, of the opening of the Parish Hall in Tockington by her Grace the Duchess of Beaufort on October 31st 1901. The Duchess was presented with a bouquet of violets and lilies of the valley by Capt Henry Pomeroy and Mrs Salmon's infant daughter - whom many of us in later life would recognise as Robin Bush's mother.